The Way to Win

Yet another new progressive organization, or a BFD?

Last Friday, at an unassuming warehouse in the funky/fancy San Francisco Dogpatch neighborhood, a power network and meta-campaign called Way To Win launched. I’m not joking or being hyperbolic here: I think this effort is going to alter American history. 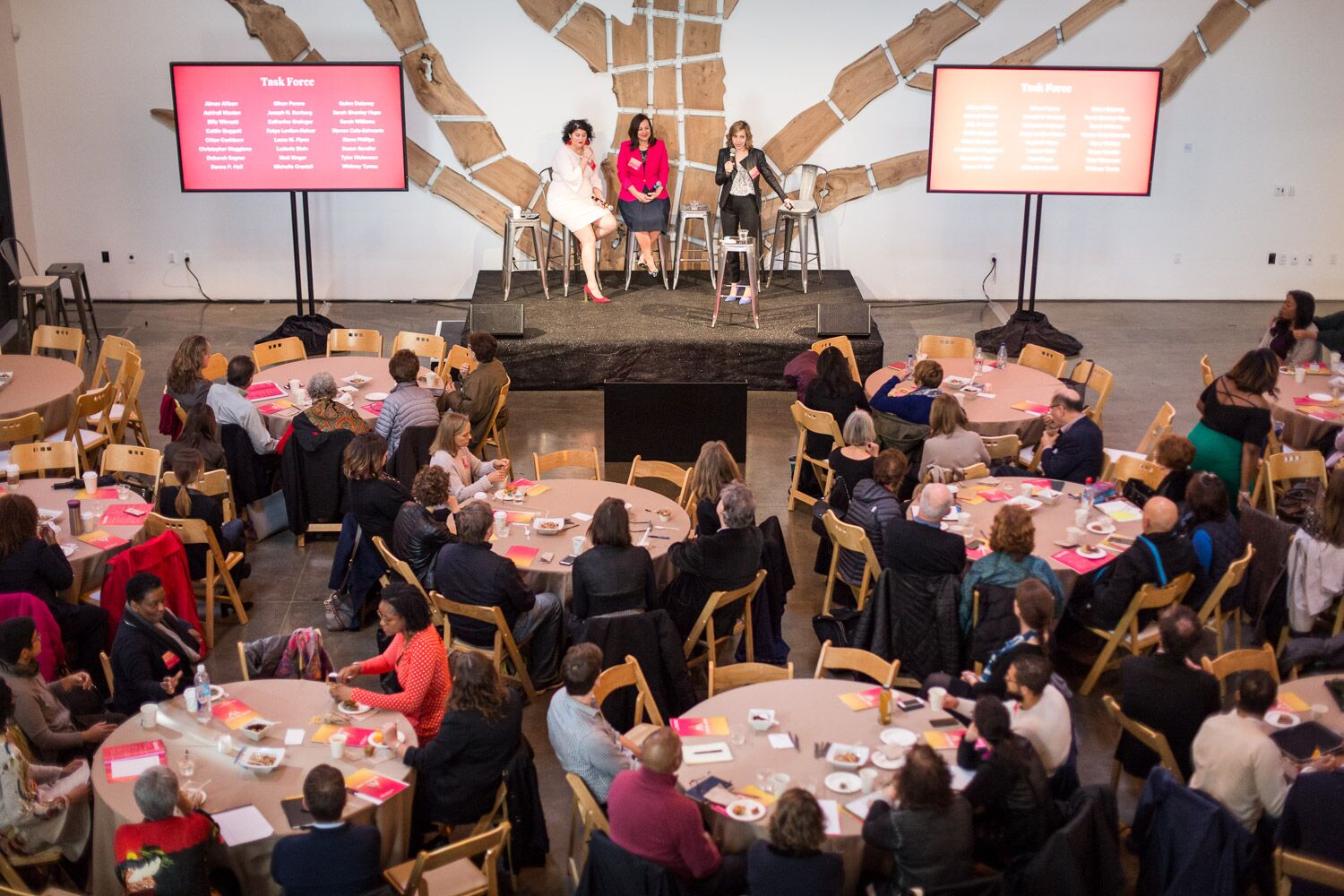 The launch of Way to Win is a part of what you could describe as the second phase of the resistance. Phase I was comprised mostly of marches and organic groups (like Indivisible and Swing Left) rising and spreading. Phase II is a sort of merging of the new resistance energy into existing progressive groups and efforts. It’s taking a little while to spin up in part because this isn’t the first rodeo for activists who are working to channel it. They know how hard the challenges are. Phase II is more inclusive, strategic, electoral, and methodical.

And it’s just getting started.

This post is going to be a quick, very non-comprehensive tour of some of the content that was presented last Friday, including some links to keep following this work.

[Full disclosure: my wife, Jenifer Fernandez Ancona, is one of the three cofounders.]

This history that needs altering

In a previous post, I covered the “Phillips-Lux-Leyden hypothesis.” Despite how dark things seem at the moment in US politics, the rest of the country could be on the verge of going the direction California has gone over the past 15 years. In California, we’ve marginalized the Republican party into a regionally isolated rump party and are building a new, functional, and joyfully multi-ethnic civilization over top of their objections.

That post has more details, but here’s the quick summary:

Demographic changes are creating a more diverse United States. The Tea Party and now Trump are the backlash to this reality, but lots of times in America’s history, big progress has followed difficult times. The people of a resurgent, diverse and progressive left are starting to build power and lift up elected leaders that are more reflective of that diversity. This new leadership isn’t sure of its agenda yet, but there’s rough agreement on what the big problems are (building an economy that works for everyone and not frying the planet) and are not (immigration and taxes on the rich being too high). And there’s a wide consensus that racism is the single biggest barrier to tackling these big problems.

Steve Phillips’ book, Brown is the New White, is a great overview to this, and there’s a new edition out. (and see that previous post for links to the Mike Lux & Pete Leyden pieces of the argument, which are also great) I’ve been hearing Steve tell this story for years (more full disclosure, I ran voter data operation for him for a few years), but it just gets tighter and more clear.

His whole talk was illuminating, but these two slides beautifully illustrate what is probably the single most important thing to understand about American politics at this juncture: 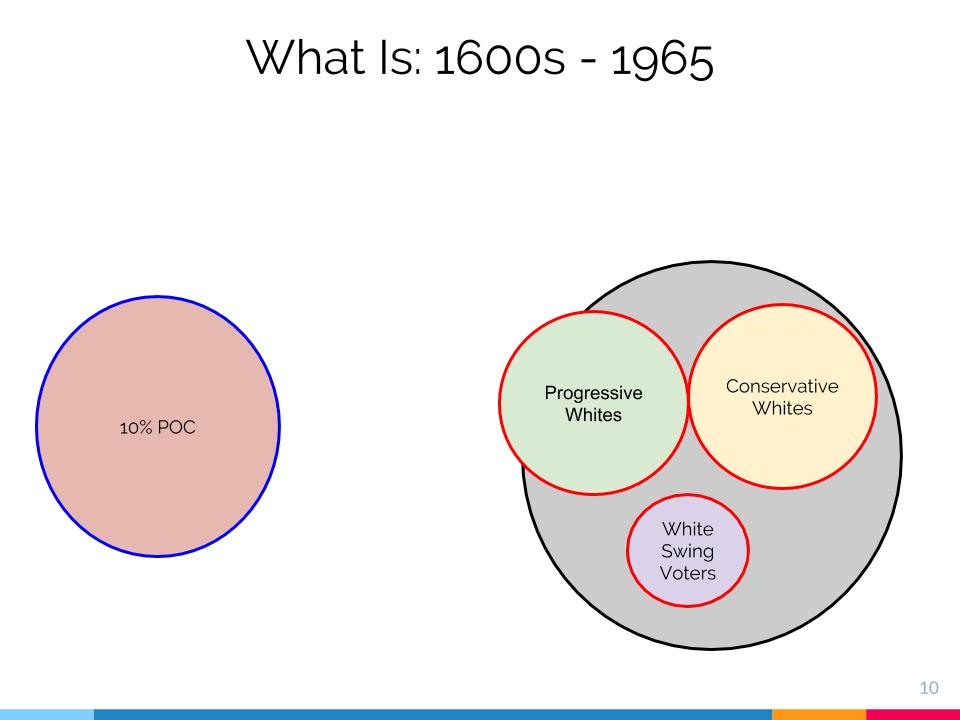 How politics has worked for almost all of US history. 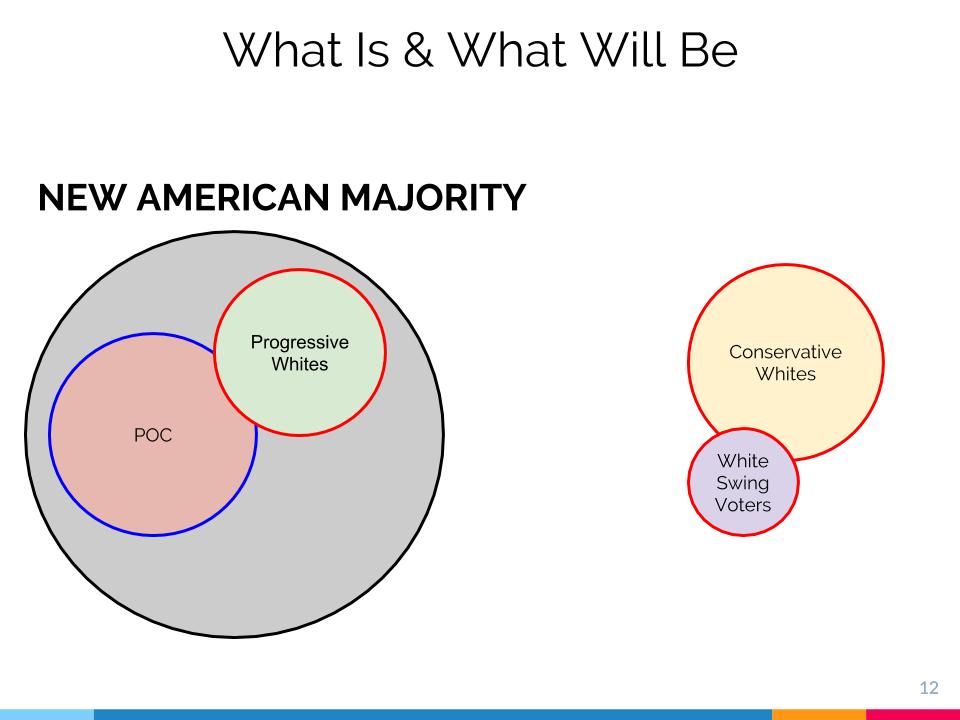 How it's starting to work now. A tiny quibble: there's a preponderance of evidence that quite a few of those swing voters are open to coming along with the people of color and progressive whites!

To borrow the phrase from Pete Leyden, we’re fighting the Second Civil War. (albeit with democracy, not with canons and on horseback) This is why things feel so screwed up right now.

When I first got involved in the early 2000s there were quite a few “demography is destiny” arguments. My sense was always - not if the left doesn’t build institutions and figure out how to reach people. Up until now, we’ve been doing at best a middling job of this.

But all seems like it’s about to change. Democracy is not destiny. Things could fall apart. But these big changes have opened the door to another possible future.

However, it’s going to take a lot of work to get there. I usually refer to the 1000 seats were lost under Obama, but it’s actually worse than that: 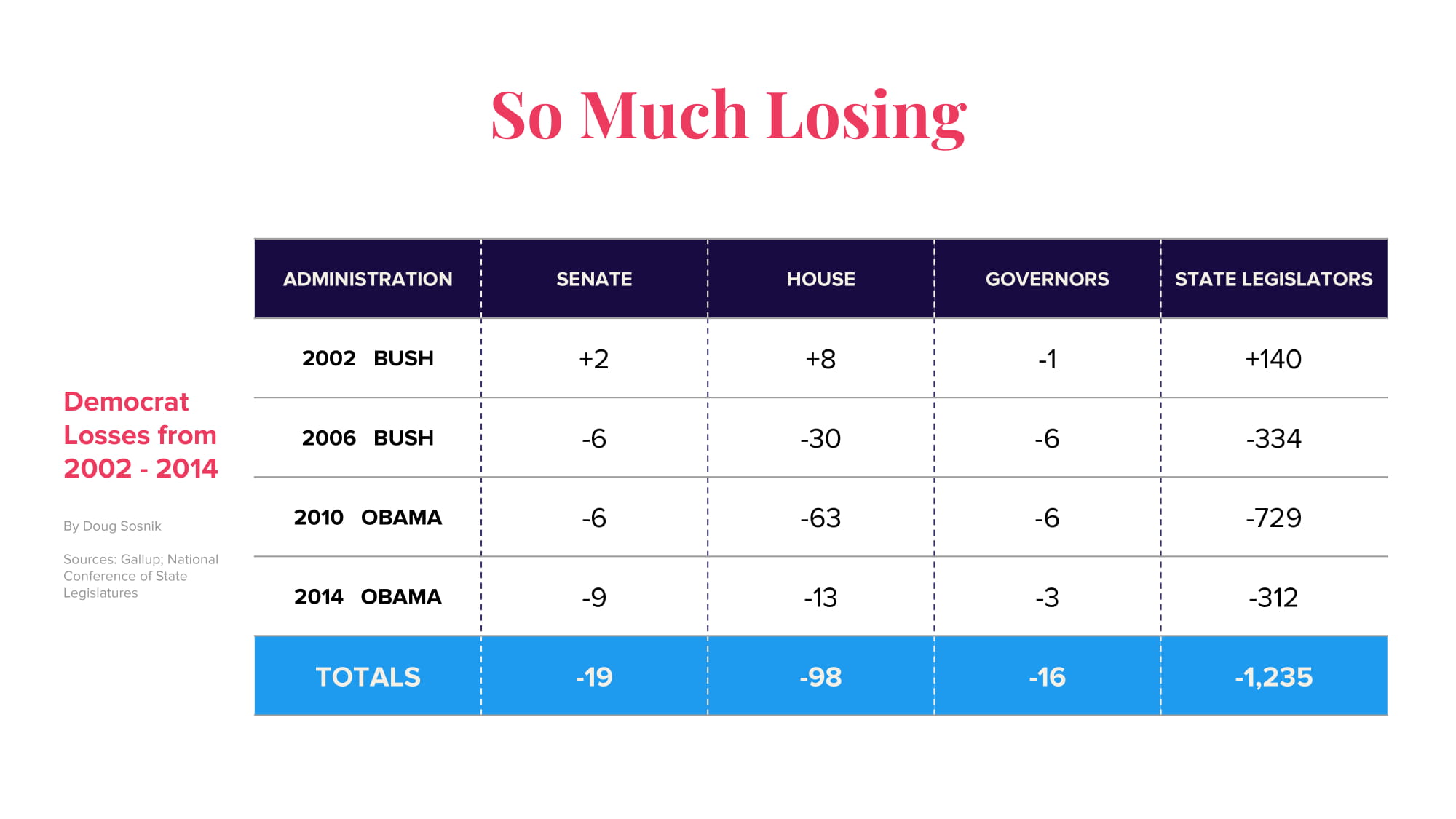 From 2006 to 2014 it’s -1235 seats for the Dems. Not only has this mediocrity been electorally disastrous, it has cost a small fortune: 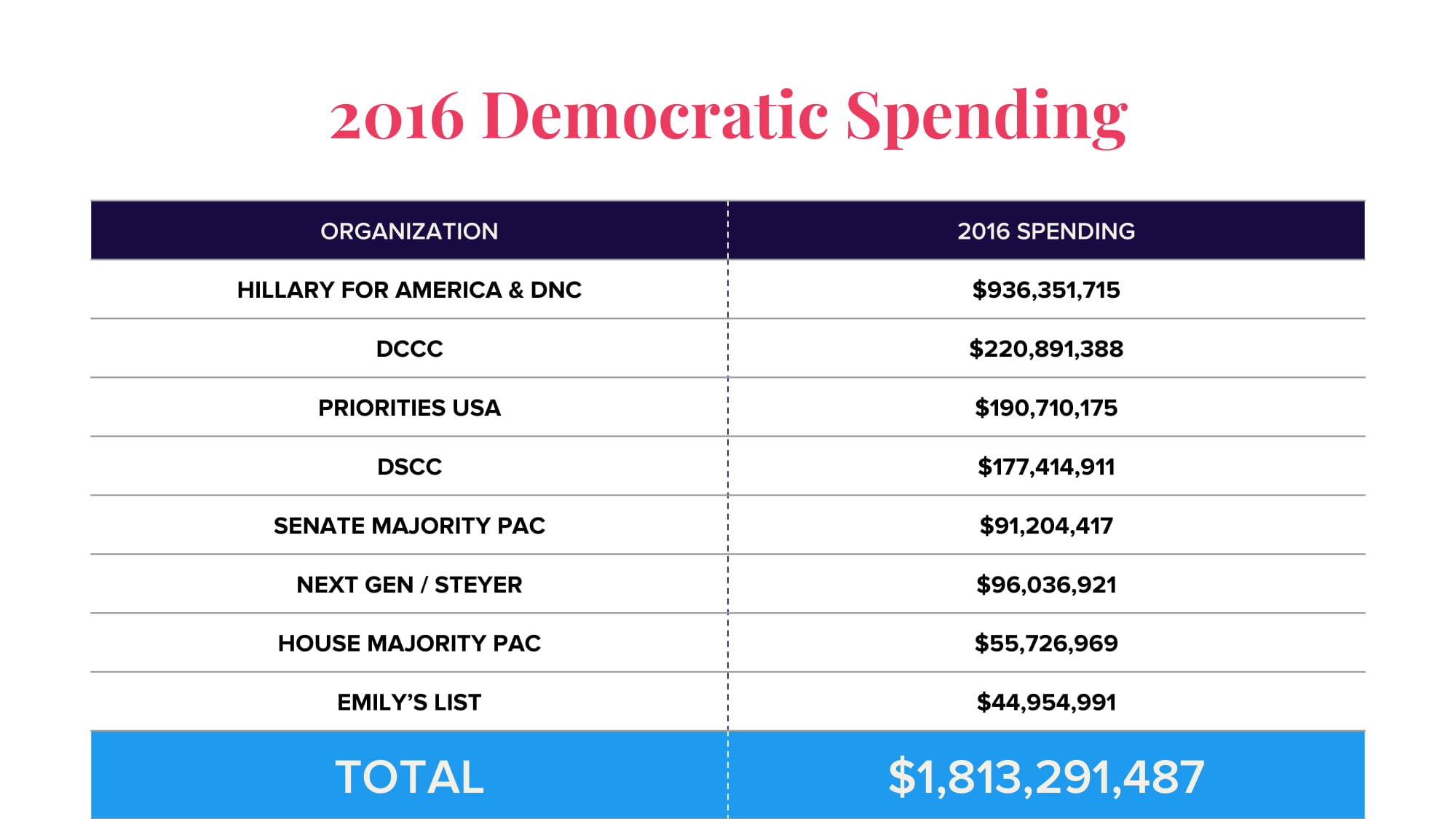 A billion here, a billion there...

But until now last Friday, there’s been no alternative. But now…

There is Another Way Forward

I’m not going to get into all the details of the strategy W2W is building. But here’s a quick sketch with a few of the slides. They started out by thinking through a winning map for 2020, from which they’ve worked back to a few target states for 2018: 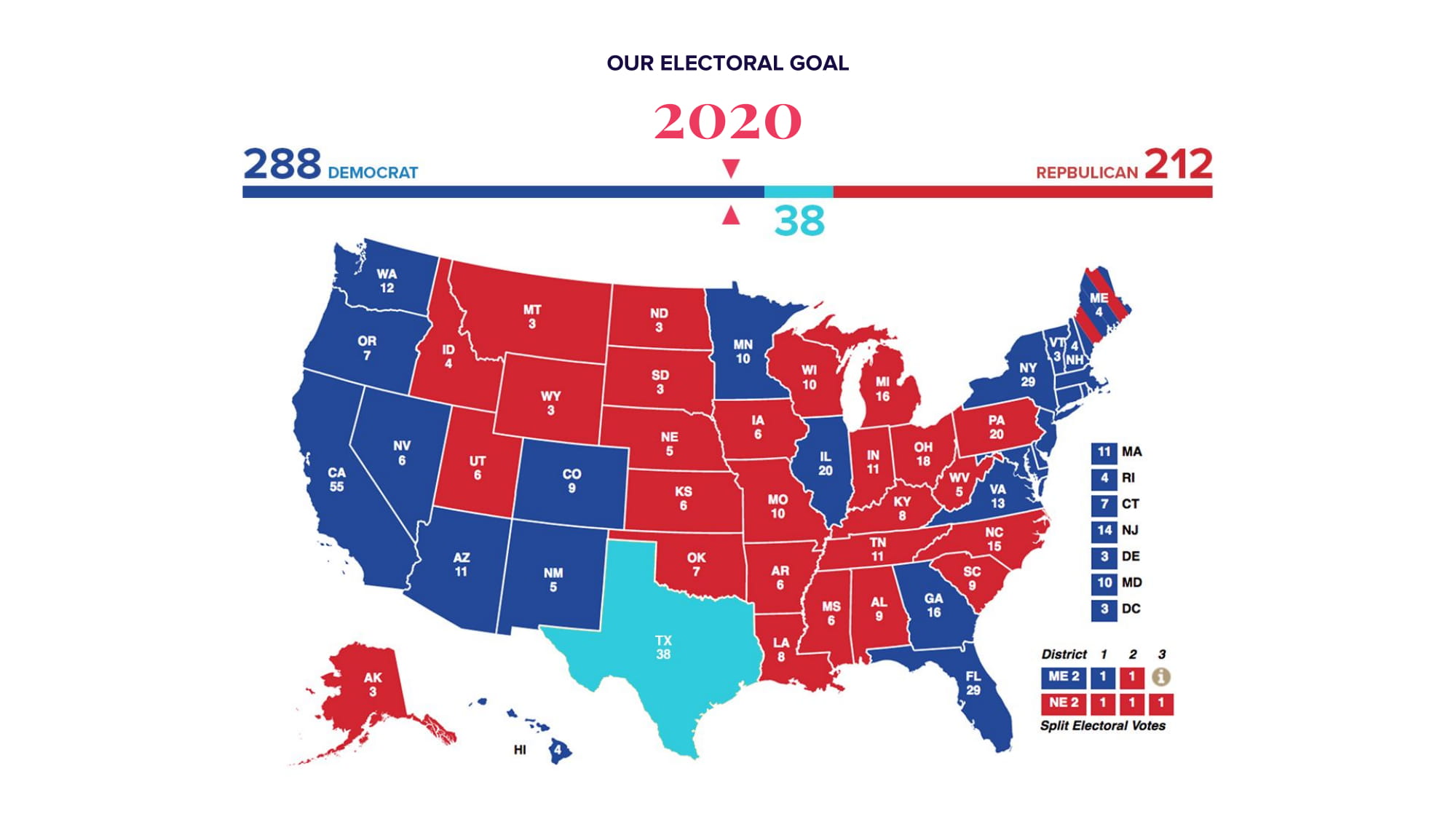 Not the only winning 2020 map, but an interesting one.

How big is the opportunity? YUGE. 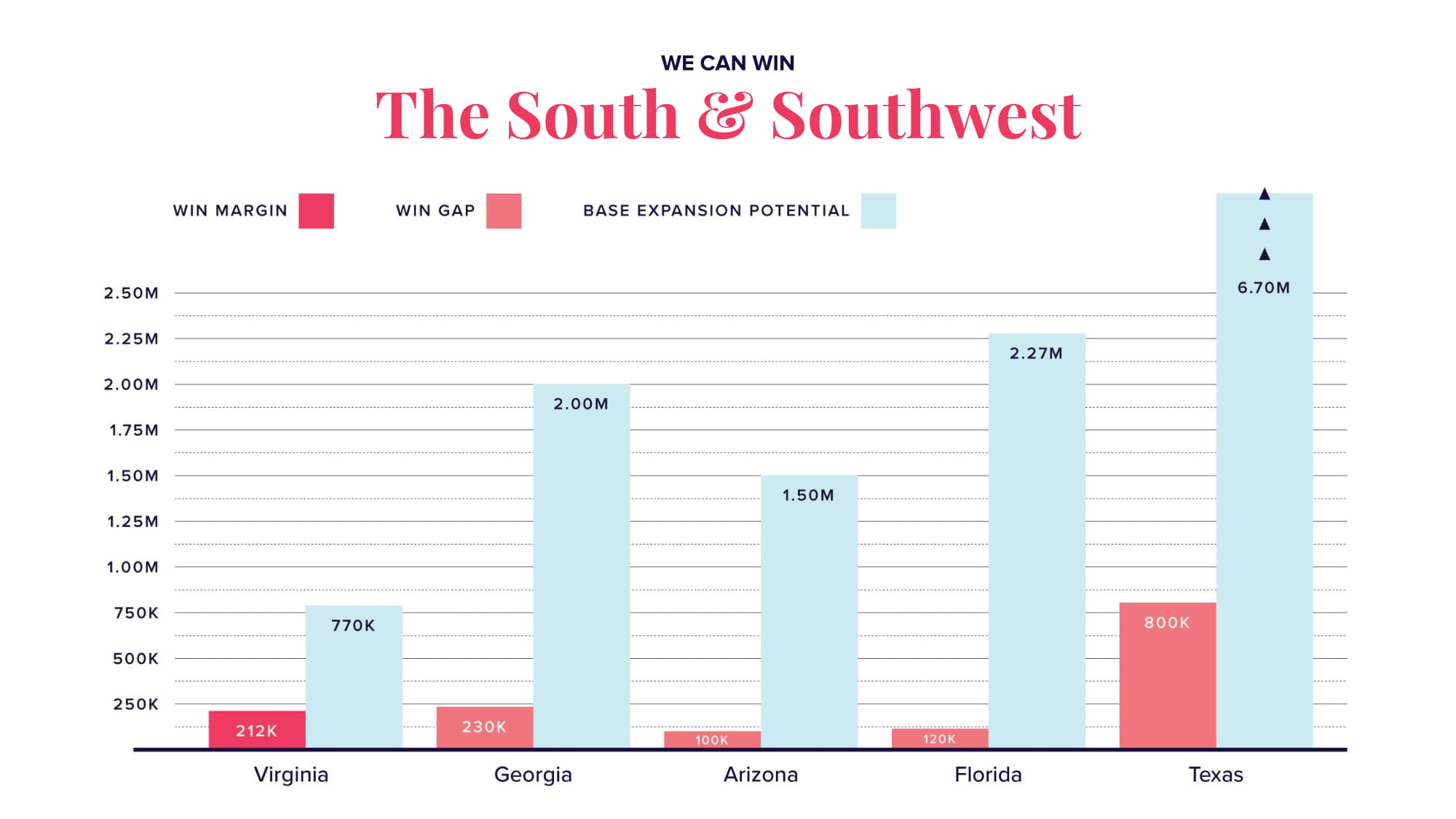 So, so many unengaged voters.

This pool of potential voters always kept me up nights working at VoterConnect. As bad as turnout rates are, there are vast pools of perfectly eligible and yet entirely unengaged citizens all over the country.

The rest of the day was pretty much laying out the details of their strategy, which hinges on five signals - 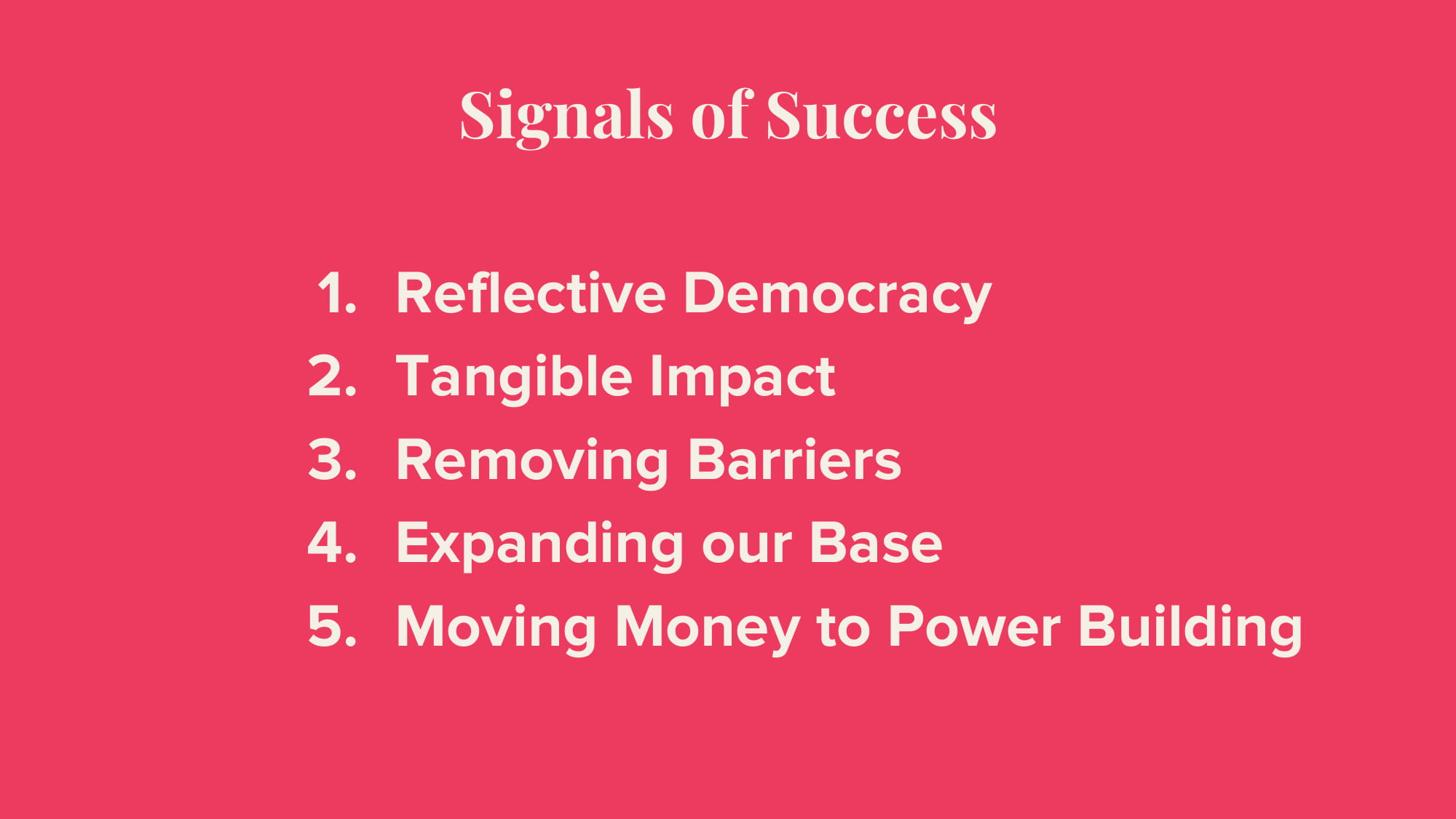 This didn’t come up at the event, but one of the great things about W2W is genuinely a blue-ocean strategy. There’s a lot of organic engagement happening in this moment, with groups like Indivisible, Swing Left, Flippable etc. that went viral to varying degrees but have mostly attracted whiter and upper middle class activists. Since it’s really difficult - arguably impossible - to diversify an organization once it’s picked up a lot of white leadership, the fact that W2W starting out with women and people of color is a cornerstone of why it’s so interesting and exciting.

The Action in the States

There were two great panels after that, one of which went into detail on the strategy and one on the implementation of the strategy in the states. The basic value proposition for investing in this emerging class of organizations called Independent Political Organizations (IPOs) is that they stick around after the elections and actually get stuff done. For example, after the VA election, lots of staff from New Virginia Majority have been placed both in the state house and in the Governor’s office. Over time, this is how this movement will break the cycle of lame campaign messages, followed by inability to deliver results, followed by further disillusionment that the Democrats are currently stuck in. 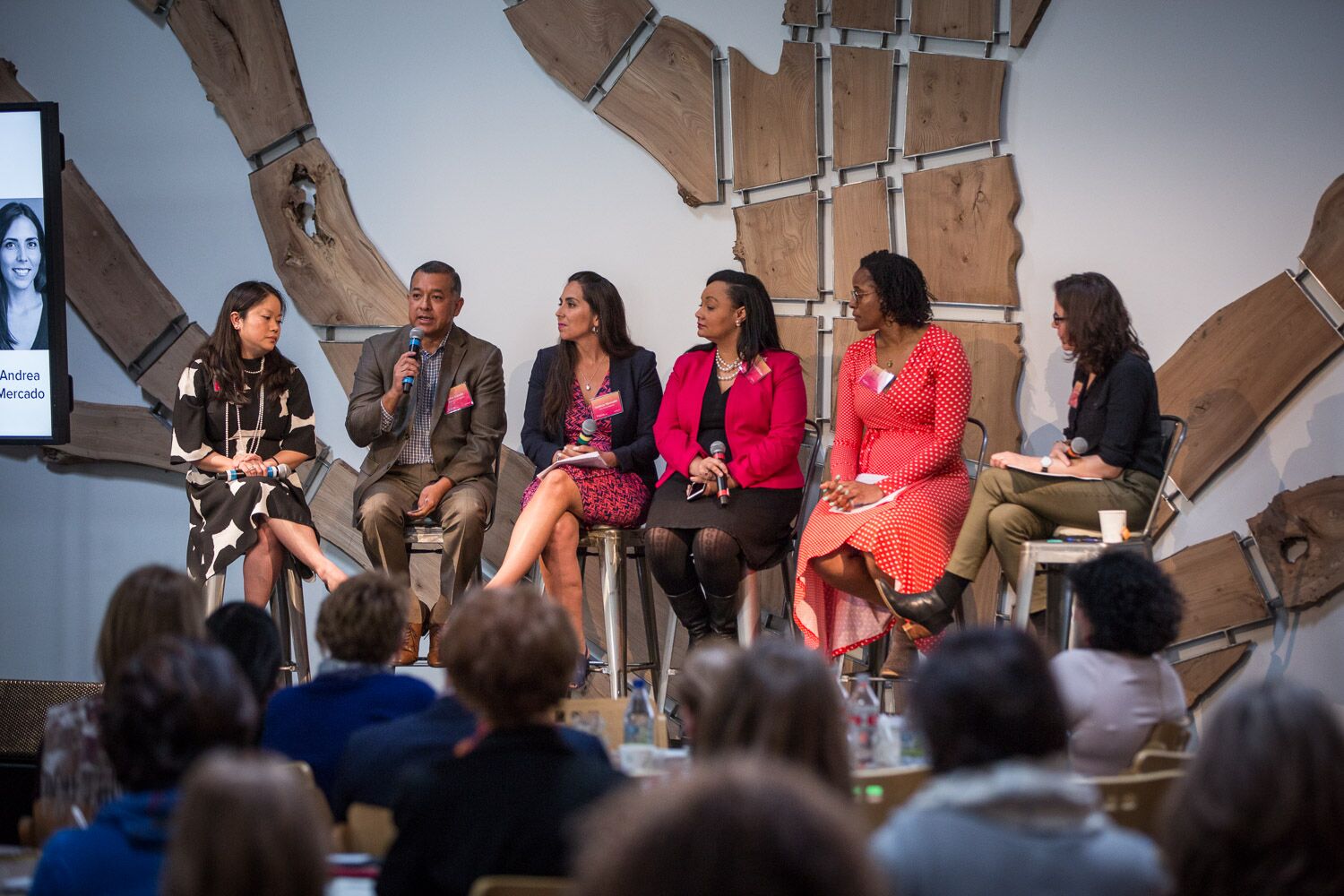 The panel had inspiring leaders from a few of the targeted states:

These handles and everyone else from the program I could find are included in this Way to Win Twitter list, which I strongly recommend adding to your Tweetdeck, if you have any idea what that is. Or check it out at the end of this post where it’s embedded.

Getting the Words Right

If you don’t know the name Anat Shenker-Osorio yet, you really should. She’s a communications expert, along the lines of Frank Luntz (but not evil) and George Lakoff. (except her work is based on far more extensive and current research) She really should be a household name among the politically aware Americans.

Anat presented the early results of research on aspirational messages that outperform the immigrant bashing that the GOP has signaled they will rely heavily on this year. The full report isn’t available yet, but you can get some details here, and through her work with the Center for Community Change, that published the invaluable guide to Messaging this Moment.

There’s reason to be optimistic the GOP anti-immigrant message won’t work. It backfired quite spectacularly when Ed Gillespie tried to wield it in Virginia. Trump is unusually skilled at turning this kind of resentment and nonsense into a coherent-seeming narrative. Most candidates can’t pull this off.

She had two other bits of advice: don’t sell tickets to the titanic, and sell the brownie, not the recipe. If those seem cryptic, you just have to try to catch a talk of hers sometime!

There was a lot more

Both candidate for MD Governor Ben Jealous and ace consultant Jessica Byrd’s talks were fantastic. I had to leave early, and I missed the panel on governing, unfortunately, but that’s a crucial part of the delivering real results component of their strategy. It’s too often left out from organizing spaces like this. 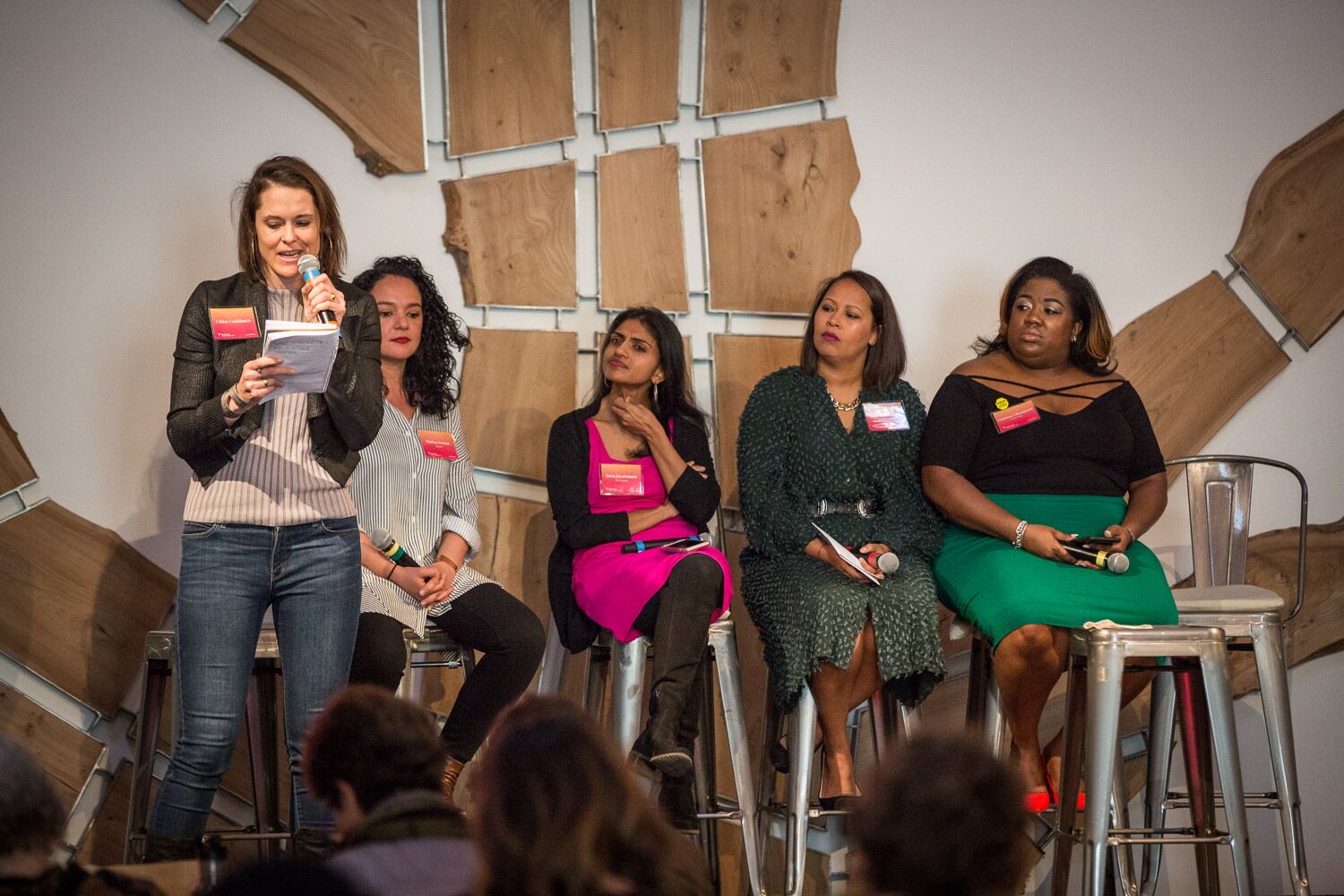 Power radiating off the success panel

I don’t know if this was the best speech of the day. I saw a lot of good ones. But when Jenifer got home that night she was absolutely beside herself over Stacey Abrams’ speech. Ms Abrams is running to be the be the first Black woman governor in the US, ever. That’s right. We’ve had zero. 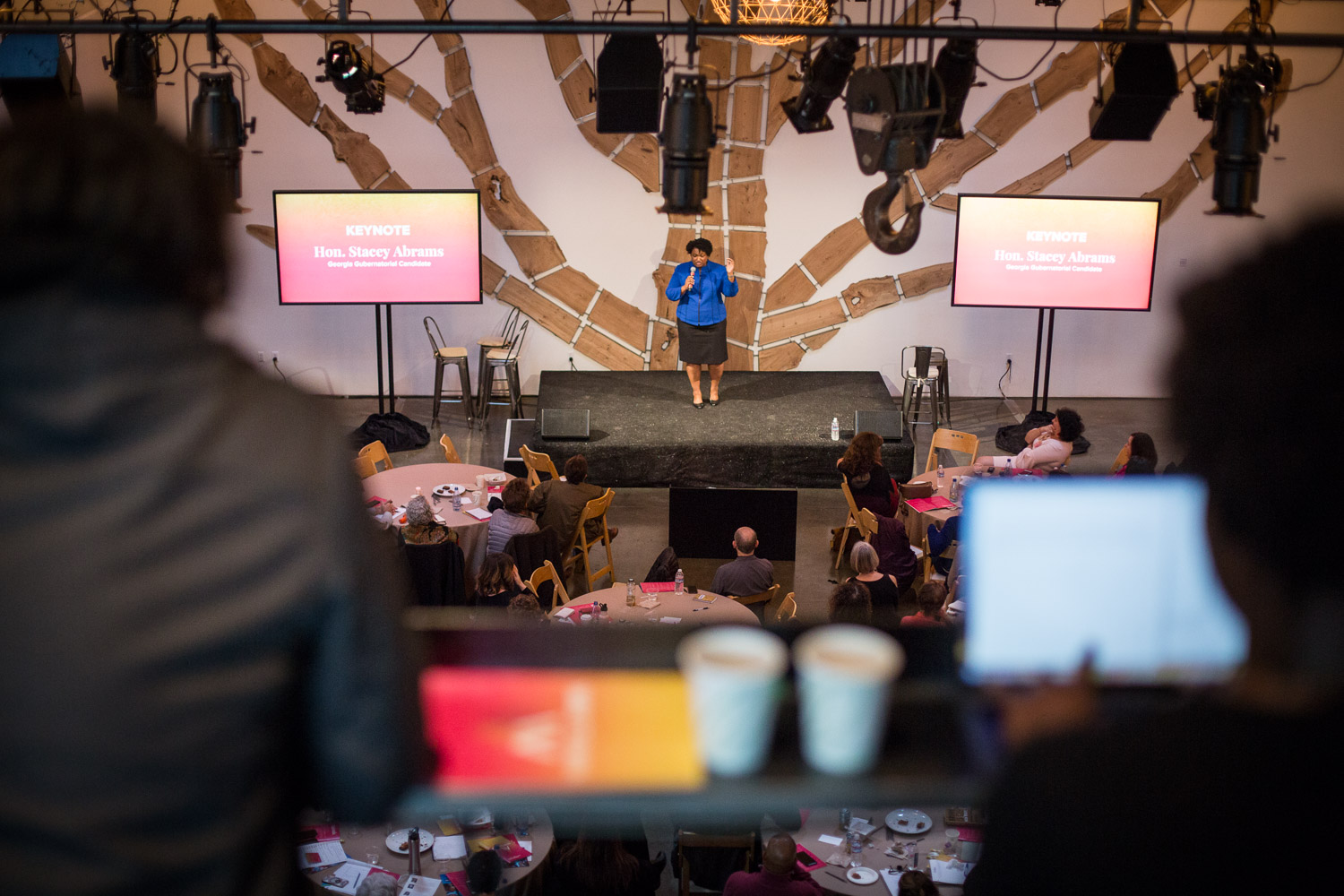 If you don’t know much about her, watch this Samantha Bee interview, and afterwards you will probably feel very compelled to donate to the IPO in that state, the New Georgia Project:

Just as I was leaving, Alabama activist (and one of the architects of the amazing GOTV effort in the black community for Doug Jones) LaTosha Brown sang a gorgeous song a cappella and then a networking/dance party sprang up. It was beautiful, and joyful. Having participated in all sorts of political spaces, I’ve found there’s a certain flatness to spaces that are predominately white or male led. The opposite of that is… spectacular. I want to live in the future that Way to Win is building. 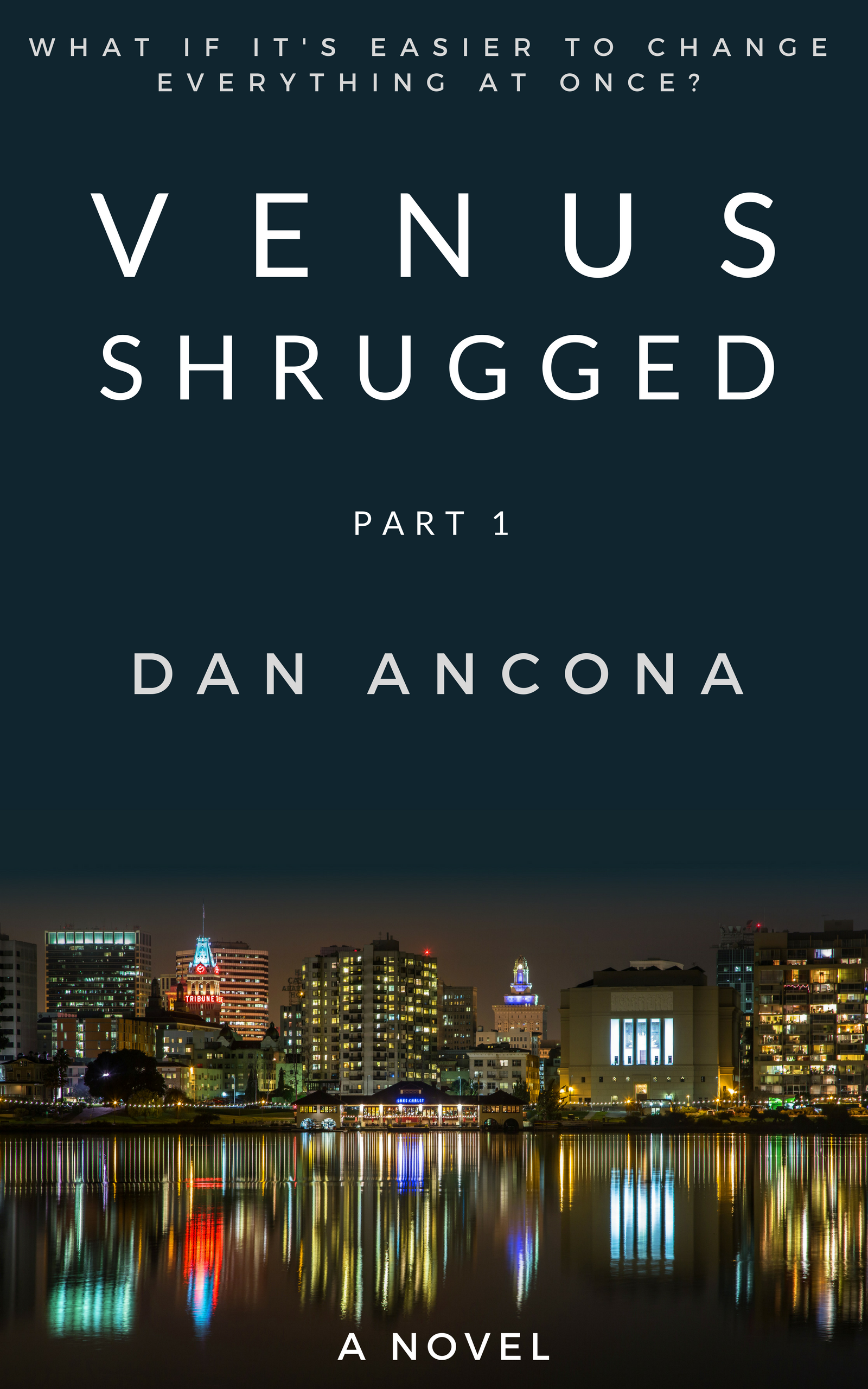